Prepare for
the Future

Our mission is simple:

Prepare students for the world outside of school.

(If we can help improve student success after school in any endeavor or field then we're interested!)

Why is this mission so important? 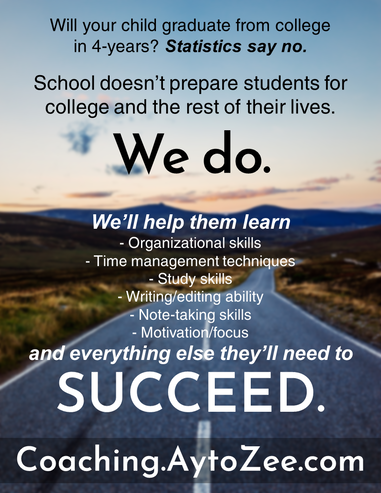 The Bad News:
​Schools woefully under-prepare students for the "real world." Generally teachers do not focus on teaching students how to solve problems or communicate, or how to be independent, creative, and a good team member. Students should practice interpersonal communication skills (and emotional intelligence), critical thinking, and project-management on a regular basis, along with decision-making alone and in a group.

Most students are also under-prepared for college, as schools don't teach organizational, time management, study, or stress-management skills. College students are forced to learn these on their own WHILE taking classes, and many of them are unable to do so (or do so slowly). Failure to learn these vital skills quickly enough can lead to dropping out of college or expensive delays in graduating.

Teacher preparation courses don't help teachers learn to be innovative in the classroom. Teaching is one of the few professions that requires little to no on-the-job training after college; your degree will get you certified, and certifications will put you in a classroom. Many states require further professional development to take place, so most teachers are forced to sit through boring and unhelpful presentations that often have little bearing on their effectiveness as teachers.
​
The Good News: We're here to help!

What do you get when you cross frustrated teachers with a school system's inability to prepare students for the real world?

Solutions from Ay to Zee!​

We're highly motivated and effective educators who want to make a difference and fill a void left by modern education in every field. Everyone can learn to be a better person, student, or teacher, and we're here to help.

A Note From Our Founder

As a teacher, I have always been very frustrated by education's inability to prepare students for the "real world" (the world outside of high school). I've endeavored to build those real-life skills into every lesson, every assignment, every activity.

I was prepared for the real world by a multitude of experiences that many students do not get. Half of my close family lived in England, so I traveled to England on average more than once a year for most of my childhood. In elementary through high school I was heavily involved in the Boy Scouts of America and eventually became an Eagle Scout. When my scouting tenure began to close (or so I thought), I began looking for other ways to serve my community. My "service before self" motto took the form of becoming a certified EMT and volunteering with my hometown first aid squad. I try to instill this motto in my students by modeling and "preaching" its value every day, and I like to think I have had a small impact on my students in this regard.

After high school I attended The Citadel, The Military College of South Carolina on a full academic scholarship. While there I received a military education, graduating as a member of the Honors Program while majoring in Social Studies Education and minoring in Fine Arts. To name a few other noteworthy achievements during my time at The Citadel, I participated in and led many extra-curricular activities, studied abroad at the University of Oxford, performed a cross-country comparison study on education, was elected as Governor of the South Carolina Student Legislature, and served as Regimental Public Affairs NCO and as Regimental Academic Officer. In my senior year I was honored to receive the Palmetto Medal alongside one of my classmates. The primary things I took away from The Citadel were life skills more than specific knowledge, and I have tried to carry those into my classroom.

After graduating from The Citadel I completed a Fulbright in Norway, working in The Writing Center at the Norwegian University of Life Sciences and teaching at the Ås videregående skole in Ås, just outside Oslo. My experiences in Norway had a dramatic effect on my teaching style, and I had some incredible experiences (and met amazing people) there!

I was hired via Skype while in Norway to teach social studies at Montville Township High School, and I have called it home ever since my first year there in 2017. During my tenure, I've created escape rooms to teach about the technology of World War I and the techniques of George Washington's Spies, countless simulations and games to replicate everything from life as a Civil War soldier to the conditions of the Progressive Era and the causes of the Red Scare, to a full-scale student-built replica of the D-Day invasion. I believe that any teacher can be creative and have an impact on students.

I see more and more students unprepared for college and life after high school, and many don't even know they're unprepared! I started Ay to Zee to help students learn and teachers teach life lessons desperately needed to succeed in the real world. With your help, I know we'll make it happen.
- James McManus